Almost all travelers consider the Maldives to be an ideal location. In the Maldives, there are several atolls and islands. Each resort in the Maldives is located on its own island, creating a sense of natural remoteness. Southern Atoll is one of these atolls with a well-deserved reputation for independence. The southernmost atolls broke away from Male’s administration in 1959 to create the United Suvadive Republic, which lasted just a few years before being forcibly put back under the jurisdiction of the central government.

The Atoll consists of a ring-shaped barrier reef, relics from the sides of an extinct volcano, and is named after the Maldivian term atholhu. A scene that seems like it came straight out of a romance novel or a young girl’s daydreams about her future wedding. It’s no surprise that so many couples choose this location for their wedding and/or honeymoon. These islands are breathtaking in terms of their beauty, seclusion, and solitude. The reef protects a central lagoon, which is located above the volcano’s buried caldera. Atolls are exclusively found in tropical and sub-tropical waters and rely on coral development at a higher rate than the eroding volcano to stay afloat. The Huvadhoo and Addu Atolls (also known as the Southern Atolls) are located in the Maldives’ furthest southern region, which surfers are constantly reminded of as they arrive at empty surf break after empty surf break. Although it is not totally deserted, this region has lesser surf boats and surf charters than the Northern Atolls, resulting in even the most popular areas being less crowded. The breakers in the Southern Atolls are among the quietest and most romantic of all the Maldives surf destinations, keeping the realism of a secluded island paradise with great waves.

When to go to the Southern Atolls

These atolls are best surfed from February to April or September to November due to wind conditions. The trade winds are strong during the usual peak surf season of May to August, making it impossible to conduct surf charters in this location, but now that Ayada Resort offers surf transfers, you may surf all year. Expect a wide range of reef breaks, ranging in severity from gentle and fun shreddable walls to hollow, sucking dry pits. Strong rips will be a characteristic of most surfs due to the reef passages being heavily influenced by tides.

sun siyam maldives resort, one of the most well-known resorts, is located on Male’s southern atoll. People travel to the resort, which is a 45-minute speedboat trip from Male International Airport. To attract guests, the resort is attractively designed with two infinity pools, white sand beaches, four restaurants, three bars, and several stunning villas.

One of the magnificent seaside escapes with limitless views of nature is the Velassaru resort. It’s known for its modern-styled villas and bungalows with tropical gardens that lie on the seashore or atop the ocean. On the white sand beach, bask in the bright sunshine. Relax in a magnificent setting at the spa, surrounded by exotic smells and the pleasant sounds of the seaside air. The resort also offers cruises from which you can view the shifting shades of blue in the sky.

This tropical resort is located on a private island 15 minutes from Male International Airport via speedboat. SAii Lagoon is an unusual and original island resort clubbed with “The Marina” – the Maldives’ largest lifestyle hub. In the middle of a tropical ambiance surrounded by white sand beaches and the ethereal Indian Ocean, enjoy a closeness to nature. Look out Maldives Vacation to enjoy your holidays. 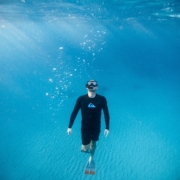 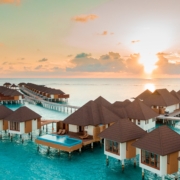 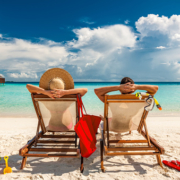 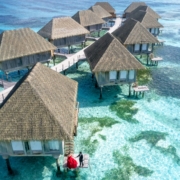 YOU AND ME BY COCOON 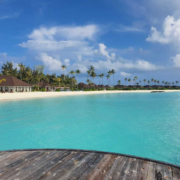 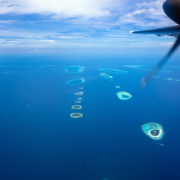 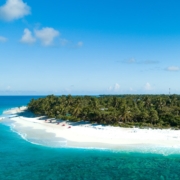 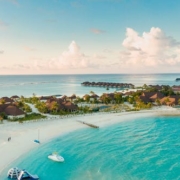 Want to join the discussion?
Feel free to contribute!

Resorts with Hot tubs in Maldives 2023
Scroll to top