Small Overview of Diving in Maldives

For those who would like to experience the best diving in the Maldives, this blog is the one to read. We will discuss in detail why the Maldives is the best destination for visitors who would like to do diving. Here, diving refers to caves, tunnels, and shipwrecks. The Maldives is a diving paradise, with clear blue water, white sand beaches, and excellent visibility. Divers can see how marine ecosystems adapt to take over these sunken relics, as well as explore the sunken treasures beneath the deep blue sea. Now let’s go deep into what are the famous shipwrecking diving spots in the Maldives.

Here are some of the recommended diving spots that one would need to look after.

The Victory Wreck is an 80m/262ft cargo ship that sank in the Maldives’ North Malé Atoll in 1981. It sank while on its way from Singapore carrying goods for the resorts on the islands. Typically, divers begin and end their dive set at the mainmast. Divers can take a glance down on the way back to take in the entire view of the wreck. They will get to see beautiful corals, turtles, batfish, pufferfish, lionfish, soldierfish and hawkfish. Divers can easily access this wreck which sits in 35 meters of water.

The best time to dive into victory wreck is from December to May. The Victory used to get roughly 120 divers a day before it closed down. It was a well-known diving wreck not only in the Maldives, but all across the world. The Maldives Shipwreck is reached by a rope linked to a buoy that marks its position. When examining the remains of Victory, please remember that the currents are strong, so carry a flashlight.

Rannamaari wreck is located in Angana Ilhuru. It is present in North male Atoll. It is an abandoned sand-dredging ship which was submerged to make wreck diving easier. The Rannamaari Wreck was used as a dredging ship in Male’ before being moved to Angsana Ihuru in 1999. They even had plans to use it as an artificial reef. The ship, however, unexpectedly sank two days before the actual incident. The dredger was docked in front of the bar, and no one noticed that the “Rannamaari” was steadily sinking until the very last moment when air bubbles and froth spilled out violently from the submerging dredger. At a depth of 26 meters, it sunk to its ultimate resting place and has since become a home for hundreds of aquatic critters and corals. One to get to see species such as Glassfish, squirrelfish, scorpionfish, stingrays, nurse sharks and lionfish.

The shipwreck in the Maldives’ Vaavu Atoll is puzzling. It has a tragic, mysterious, and beautiful feel to it. The Vaavu Atoll Shipwreck said to be an Indonesian vessel, is one of the Maldives’ most Instagram-worthy locations. The ship lies half-submerged in the abundant Vaavu waters, with the bow partially visible. A sloping half-submerged tower in the water is the best way to describe it. The Vaavu Atoll Shipwreck, located just a few kilometers from Keyodhoo Island, has become a major tourist site in the Maldives.

The wreckage is quite a spectacle even among Maldivians who are accustomed to the lovely sight of turquoise lagoons and white sand beaches. Exploring the Maldives Vaavu Atoll Shipwreck, which is rich in corals and marine life, would be a wreck diver’s dream. Vaavu Atoll Fullday snorkeling adventure packages combined with abandoned island picnics and sunset dolphin excursions make diving in the wreckage even more remarkable and memorable. It is indeed a sight to witness, and it serves as a reminder of why a Maldives vacation is so wonderful.

The Kudhimaa Wreck is a medium-sized steel wreck near the Machafushi house reef. It is a 50-meter-/150-foot-long cargo ship and was intentionally sunk to provide a wreck for divers visiting the South Ari Atoll. At a depth of around 30 meters/100 feet, the wreck lays on the sandy bottom and has already sprouted coral and algae. On both sides of the wreck, cargo holds are easily accessible. The battle for space that has sprung up on the wreck’s surface is an interesting aspect of this wreck. A group of batfish, pufferfish, boxfish, and the traditional huge lionfish are found on and around the shipwreck. Needless to say, the wreck is brimming with macro photography and filming opportunities for aspiring photographers and filmmakers. Kudhimaa is best explored between June and December. Water temperatures will range from 27 to 30 degrees Celsius, with great visibility.

The Shipyard is one of the most popular dive sites in the Lhaviyani Atoll. Two 40-year-old collisions are found in this region. While one is upright, the other is lying on its side some 30 meters beneath the surface. Large pelagics, nurse sharks, and grey reef sharks frequent these areas, which are home to a diversity of fish. This is yet another must-see destination to add to your itinerary. The bow of Skipjack II, emerging ever so elegantly from the gorgeous seas of Lhaviyani Atoll, welcomes you to a world of underwater beauty in a rather dramatic manner.

Both the Maldives Shipwrecks are now covered in soft and hard corals. Yellow sweepers, butterflyfish, and Napoleon Wrasses are among the marine fauna to be found. Nurse sharks and grey reef sharks hang around at the Shipyard on the Lhaviyani Atoll. The Shipyard Lhaviyani Atoll is an excellent spot for both experts and beginners, even though currents can be severe at times.
Checkout our Maldives Vacation to Experience all these in real life. 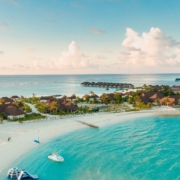 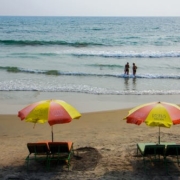 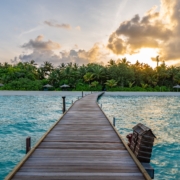 The Hilton Resorts in Maldives 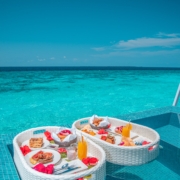 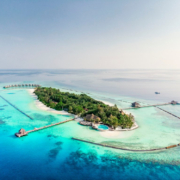 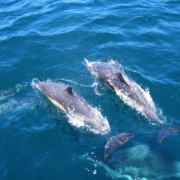 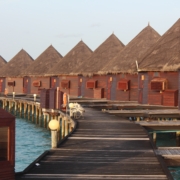 Want to join the discussion?
Feel free to contribute!

10 Things to explore in Maldives

Varu by Atmosphere
Scroll to top